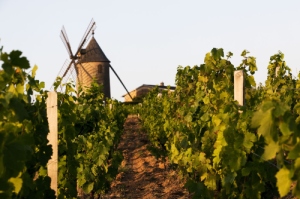 Vineyards in the Moulin-à-Vent Cru, with its namesake windmill, in the Beaujolais of France. ©Château du Moulin-à-Vent

A few weeks ago, I had lunch with a former colleague and friend, and the subject of traveling around France came up. “I’d like to go to Beaujolais,” I told her. “I’ve started drinking Cru du Beaujolais and they’re incredible.”

Beaujolais: It is either considered tepid, uninteresting fruit juice that comes out around Thanksgiving (in the form of Beaujolais Nouveau) or it is stigmatized as “hipster wine” (which I take to mean that it is loved by indie types because its not popular and therefore, ironic).

That about sums up this wonderful yet seemingly cursed wine. At the moment, it is damned no matter what it does.

Because of this, I want to crusade for Cru du Beaujolais and get people on the train to share the fun. After all…

I am constantly humbled by the fact that I get paid to drink, talk, and walk wine. After 25 years in both hospitality and the alcohol industry, this blog provides a little education, and, hopefully, a touch of humor and perception to the world of wine and spirits. You can also find me on our internet show, wineguystv, and on clear channel/iheart radio as a co-host with Keith Miller and Becky Creighton on a weekly wine and food show called vineanddineradio.
View all posts by terroirradioandtv →
This entry was posted in Uncategorized. Bookmark the permalink.